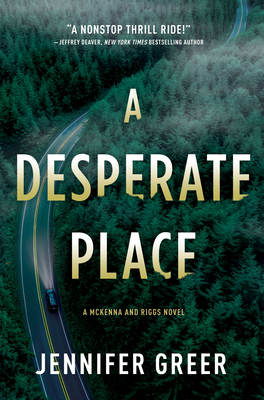 Join JCLS as we talk to Jennifer Greer about her debut novel A Desperate Place.

In this novel, Whit McKenna and ME Detective Katie Riggs, an unlikely pair, investigate three murders that share one gruesome secret. McKenna is a new crime writer for the Medford Daily Chronicle. She moved to Medford, Oregon with her daughters after a harrowing experience as an L.A. Times reporter on assignment in Afghanistan, where her photojournalist husband was killed. Riggs, a cancer survivor, and experienced homicide investigator studies the dead almost as if she is searching for answers to her own near-death experience. McKenna and Riggs trade leads quid pro quo as they independently race to investigate a series of murders while the killer is on the hunt.

Jennifer Greer holds a degree in English Literature and Journalism. She worked as a crime writer for the Fresno Bee. Interested in foreign affairs, she traveled to Russia and Europe. She lived in London studying history, art and literature. She reported from the war regions of Croatia and wrote an award wining article on the women and children refugees.

Jennifer's notable interviews as a journalist include President Jimmy Carter, Israeli Prime Minister Abba Eban, Activist Ralph Nader, and authors Isabel Allende and Francine Rivers. Jennifer was a resident of Medford for seventeen years before moving to the Oregon Coast. A Desperate Place is her first novel.