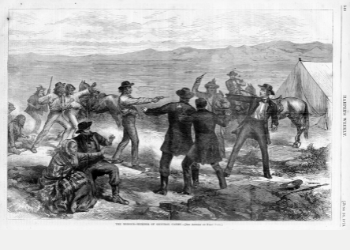 Windows in Time: "The Amazing Journey of Leonard Case and The Execution of Captain Jack" Online

For nearly 150 years historians have been studying the Modoc Indian War, which occurred in the Klamath Basin in 1872-73. Only recently was it learned that a millionaire Leonard Case living in Cleveland, Ohio, traveled halfway across the country to witness the execution of four Modoc warriors at the conclusion of the war. Case kept a journal, including key details of the days and hours leading up to the hanging of the Modoc leader Kintpuash, also known as Captain Jack, and three other warriors.

Join Todd Kepple as he examines the journey of Leonard Case. Kepple is manager of the Klamath County Museum for the past 16 years. He has served for seven years on the Oregon Heritage Commission.