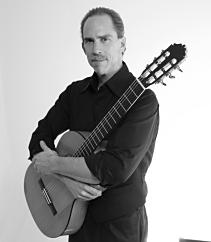 Grant is the son of a bebop saxophonist and has played guitar since he was 10 years old. Grant has performed in several productions at the Oregon Shakespeare Festival, including the 2019 bilingual production of La Comedia of Errors. He appeared in the Collaborative Theater Project’s 2022 production of Don Quixote in July. He is currently a member of Dúo Flamenco with percussionist Terry Longshore, Djamenco with jazz guitarist Dan Fellman, and the West Coast troupe Flamenco Pacifico. Grant has recorded five CDs and one DVD. He is a founding member of the Guitar Society of Southern Oregon and is currently an adjunct professor of guitar at Southern Oregon University.